What's HOT!
What Type of Car Owner are You?
by Decorator's Wife
READ STORY

by Adele on April 24, 2017
previous article
Blacknote is the eLiquid for Adults - No Teens Allowed!
next article
Tax Rebate Firm Reveal Ways Construction Workers Can Claim a Tax Refund 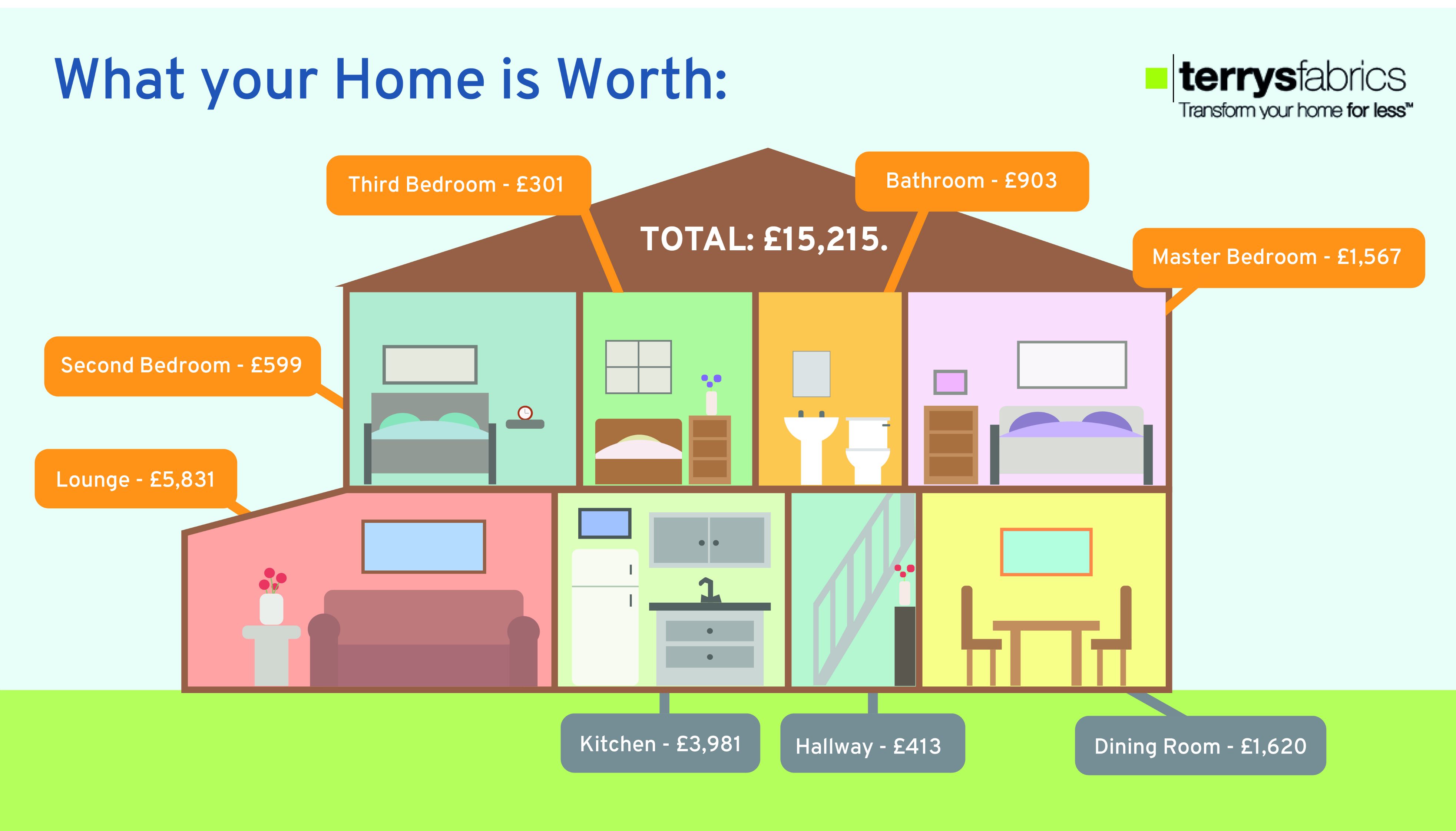 www.TerrysFabrics.co.uk, a home furnishings specialist, conducted the research as part of an ongoing study into the value of Britons’ interiors. 3,186 homeowners took part in the survey, all of whom were over the age of 18 and lived in a 3-bedroom house. Respondents answered questions on the average value of items in their home, which were used to calculate the average value of the average British home.

Initially, all respondents were asked ‘Do you feel that you have too many items in your home, such as furnishings and decorations etc?’ The team at Terry’s Fabrics reviewed the answers to find that the majority of respondents (61%) felt that they did have too much in their house.

All respondents were asked to estimate the value of each of the rooms in their house according to the expense of the contents, including all appliances, electrical goods and furniture. Results were compiled by researchers, with the average cost of each room revealed as follows:

Researchers compiled the average cost of each room in order to calculate the average value of each home’s furnishings and items. The total value of all the contents in the average British home was revealed as £15,215.

Wanting to delve a little deeper, respondents were asked to reveal which items they spent the most amount of money on. The top 5 most expensive items bought by Britons were revealed as follows:

“There’s no hiding the fact that it is expensive to furnish and decorate your house, but I have to say I’m surprised at just how much Britons seem to be spending on furnishing their homes. There’s some great deals out there for brilliant products, so it is really worth shopping around to get exactly what you want. You could even try some made to measure products, which can add the special touch to your property.”

If you’re looking to refurbish your home this summer but need a big cash injection, why not see if you are entitled to a tax refund? A good accountancy service will be able to claim a tax refund for you and you will probably be surprised by what you can claim. You can claim tax back on money you’ve spent on tools, mechanics tools, uniforms, travel and much more. There’s nothing to lose, it just take seconds to use the free online tax calculators to see how much you’re owed.

by Decorator's Wife on September 15, 2020
For most teens going off to university, this will be their first time living away from home and, whilst the thought is a quite an exciting one, the reality of living in a drab room in halls will soon have them crying out for some personal touches to make the room a little more homely. […]

Use Your Power Tools to Help with the Big Spring Clean!

by Decorator's Wife on July 16, 2019
For some reason when the weather becomes warmer and the sun begins to shine we notice lots of little jobs that need doing that we were perfectly happy putting up with during winter. It’s no surprise that the first bank holiday of the month sees flocks of homeowners descending on the DIY stores for repair […]

Decorate without Visiting B & Q!

by Decorator's Wife on May 17, 2017
Trends change so fast which can leave your home improvement budgets struggling to keep up however here  we’ve come up with great ideas to decorate with what you have. Adjust Your Curtains You can change the whole appearance of a room simply by changing the position of your curtain pole. Place it higher to give […]

DIY Tips: How to Treat Damp

by Decorator's Wife on September 18, 2015
No-one likes damp – as well as looking ugly it usually smells too. But putting it right is easier than you think. Ronseal has a range of solutions designed to help you find and fix all kinds of damp. Applying them is simple. Follow these step-by-step instructions from Mick Bowler, Research and Development Manager at […]

by Decorator's Wife on September 16, 2015
Protecting interior trims and furniture will to keep them looking their best, and Ronseal’s Diamond Hard Interior Wax makes it easier than ever to get the job done. Quick and simple to apply, it offers all the protective qualities of a varnish, delivered with the great-looking, natural finish of a wax. Application couldn’t be easier. […]
97%

by Decorator's Wife on September 9, 2015
Aldi Special Buys Demolition Breaker 1700W, £99.99 At Decorator Dad we’ve promised to keep an eye on Aldi’s Special Buys and bring you news on the best products. We’ve recently been trialing out their Demolition Breaker, a powerful 1700W machine designed to make light work of tough demolition jobs. Suitable for breaking, chipping and even gouging concrete, tiles […]

by Decorator's Wife on September 24, 2020
Two thirds of UK households have unfinished projects of which 63% are relatively simple such as painting and decorating.  75% of householders say that how they decorate is driven by what others think about their homes. Imagine the stress then of having a sitting room with one wall painted and a bathroom half tiled, knowing […]
1307

by Decorator's Wife on September 23, 2020
This post has been contributed by the great people of Tax Rebate Services, the site that allows you to claim a mileage tax refund or a tax rebate on tools and expenses for free. See if you’re entitled to a tax windfall by using the tax calculators on site and treat yourself to something special, […]
1698

A Guide to Cordless Drills

by Decorator's Wife on September 22, 2020
By Martina Mercer Nothing gives a man, or perhaps a woman for that matter in an era of sexual equality, a better feeling that to have power tools in hand and cordless drills would top most lists for sheer excitement, making any DIY job an enjoyable experience. Few would turn their nose up at receiving a […]
1745

Top Tips for Heating Your Bathroom with Style

by Decorator's Wife on September 21, 2020
Heat is essential to any bathroom but this doesn’t mean you have to compromise on style or pay over the odds for fuel consumption. If you’re adding a radiator to a bathroom or considering alternative heat sources, check out our tips for heating your bathroom with style. Radiators are a practical addition to a room […]
2088

DIY Myths That Are Completely False

by Decorator's Wife on September 16, 2020
Myths: we’ve all heard them before, whether they’re about eating carrots to help you see in the dark, not drinking coffee for fear of stunting your growth or waiting an hour to swim after eating. Myths are everywhere, and it’s sometimes harder than you’d think to tell which you should believe and which are completely […]
918
Hot Right Now This Month
Try a different filter